When Slick Rick Made Hip-Hop A Great Adventure

You had to be there. That statement is often used to isolate people who were not there, but other times there is no other way to properly convey a seismic event – you truly had to be there. This is the case with UK expat and Bronx resident MC Ricky D, later crowned Slick Rick, the man behind the all-time classic, 1988’s The Great Adventures Of Slick Rick.

But first, rewind three years. The summer of 1985 was an exciting time for hip-hop. Run DMC were continuing to enjoy crossover success with King Of Rock, the burgeoning Def Jam label was releasing incredible records by newcomers LL Cool J and The Beastie Boys, and the nascent genre was still very much about fun, braggadocio and good times.

At the time, most rappers were still bragging about how great they were on the microphone and how fast their DJs were on the turntables. There had always been an element of storytelling to early MCs’ rhymes, but outside of Jimmy Spicer not many made storytelling their actual style. But then, without warning, the “original human beat box”, Doug E Fresh and the Get Fresh Crew, featuring MC Ricky D, released the single ‘The Show’/‘La Di Da Di’.

To call this release a paradigm shift would be an understatement. ‘The Show’/‘La Di Da Di’ created an actual subgenre in hip-hop (storytelling over a human beat box). Every car that passed by, every boom box and every house party in urban America, blasted this single. But after performances on Soul Train and the UK’s leading music TV show, Top Of The Pops, as well as appearances in the major soul and hip-hop magazines, whispers of a split between Doug and Rick began to circulate.

In 1987, New York radio stations began playing the Doug and Rick track ‘Treat ’Em Like A Prostitute’ on their late-night mix shows. A year later, ‘Treat ’Em Like A Prostitute’ was released as the B-side to Rick’s debut solo single, ‘A Teenage Love’, on Def Jam Records. The song also featured in Run-DMC’s eagerly awaited movie, Tougher Than Leather, thus building the anticipation of a new project from Rick. But whispers that it would be a solo venture left many wondering how he would fare without the human percussion of Doug E Fresh providing a sonic backdrop.

The first taster of what would become The Great Adventures Of Slick Rick, ‘A Teenage Love’ was about as far as things could get from from Slick Rick’s previous work with Doug E Fresh. Though released right in the middle of hip-hop’s so-called Golden Age – an era heavily dominated by sampling – ‘A Teenage Love’ contained live bass guitar and keyboards in addition to a slower tempo than most hip-hop at the time. Rick hit his audience with a track that was unexpected both lyrically and sonically, scoring a hit with a mostly teenaged fanbase who could relate to the perils of young relationships.

Hip-hop’s second wave (consisting of artists the like of Run-DMC, Whodini and The Fat Boys) was shifting to its third, with Big Daddy Kane, Eric B & Rakim and Public Enemy leading the way. Having Big Daddy Kane appear in the video for ‘A Teenage Love’ was a brilliant move that both raised Rick’s profile and the anticipation for his full-length release even higher.

For those that wondered what could possibly replace the trademark sound of Doug E Fresh’s human percussion, The Bomb Squad (Public Enemy’s production team) and Jam Master Jay of Run-DMC were the answers. Released on 1 November 1988, The Great Adventures Of Slick Rick was a sonic mix of drum machines, samples, scratches and, occasionally, live instrumentation. While Slick Rick’s previous lyrical displays were confined to the visions of others, he now had an entire album with which to flex his storytelling muscle – and he did just that.

The album’s most commercially successful hit is ‘Children’s Story’, a cautionary tale framed as a bedtime story. Unlike much of the gangster rap that would soon dominate, ‘Children’s Story’ didn’t glorify street life; it spoke to the realities of its hustlers and, most importantly, their fatal downfall. The music for ‘Children’s Story’ would give Slick Rick’s labelmate Montell Jordan his biggest hit seven years later with ‘This Is How We Do It’, and the track has been sampled countless times in every era, by everyone from Nas to Dr Dre, ASAP Rocky to Migos.

Elsewhere, ‘The Moment I Feared’ was one of the album’s standout cuts, with Rick flowing through several frightening scenarios over a slowed down sample of James Brown’s ‘Funky Drummer’. ‘KIT (What’s The Scoop)’ showcased the brilliant creativity of Rick The Ruler, playing the part of Knight Rider interacting with his futuristic car, KIT, from the hit 80s series. The reggae-influenced ‘Hey Young World’ marks one of the early incarnations of sing-rapping as Rick reminisces about yesteryear while once again warning the youth of the danger in today’s world. Clearly, Rick struck a chord, as his words “Hey young world… the world is yours” inspired generations of MCs to strive for something bigger when most of the world was telling them to stay in their place.

Solidifying Slick Rick as a confident solo artist, The Great Adventures Of Slick Rick remains the work of one of hip-hop’s most dynamic personalities and the world’s greatest storyteller.

You can buy The Great Adventures Of Slick Rick here. 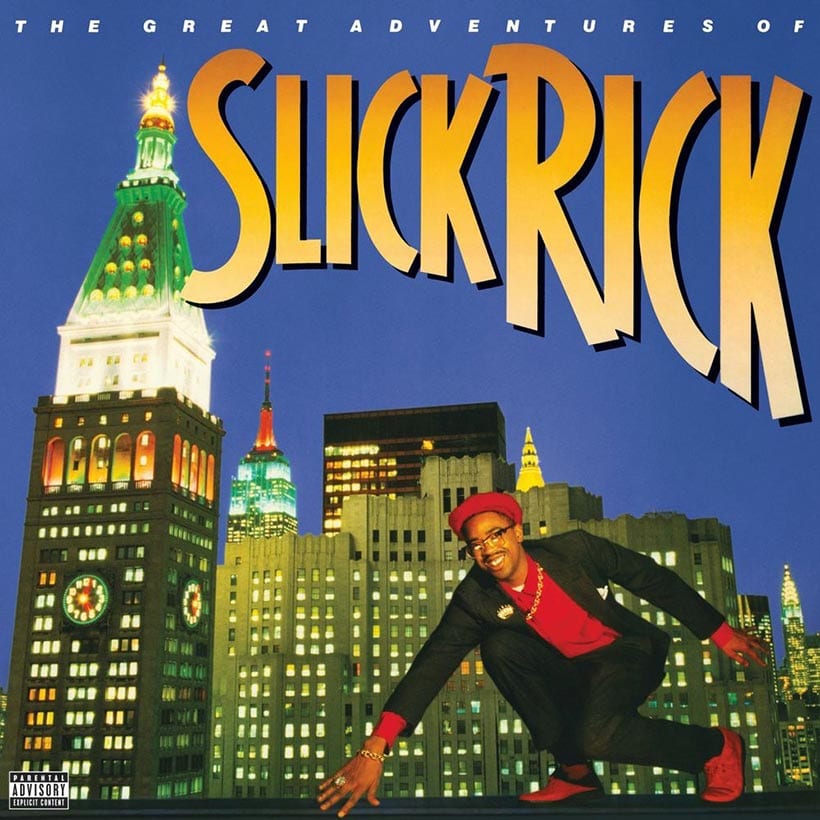