After a long wait, Queen biopic Bohemian Rhapsody has arrived on the silver screen. The film follows the story of the band from their formation to their iconic 1985 Live Aid performance in London. Bohemian Rhapsody frames the bands’ long career and complicated private lives against the soundtrack of their most iconic songs and live performances.

Rami Malek shines as Freddie Mercury, looking near identical thanks to the attention to detail in both makeup and costume. Before he was Freddie Mercury he was Farrokh Bulsara, recently arriving in England with his family after being chased out from his native country of Zanzibar. We see the progression from an eccentric university teen to the show-stopping writer, singer, and performer known internationally as Freddie Mercury, who leaves his ‘upheaval of an upbringing’ behind him. Bohemian Rhapsody manages to capture the electric inclusive energy that Queen was known for in their live performances. Montages show them touring the word, starting out with their first tour in the United Kingdom before breaking into the United States – from where they become unstoppable, touring worldwide to sold-out arenas. From Brazil to Japan to Australia, Queen saw it all. 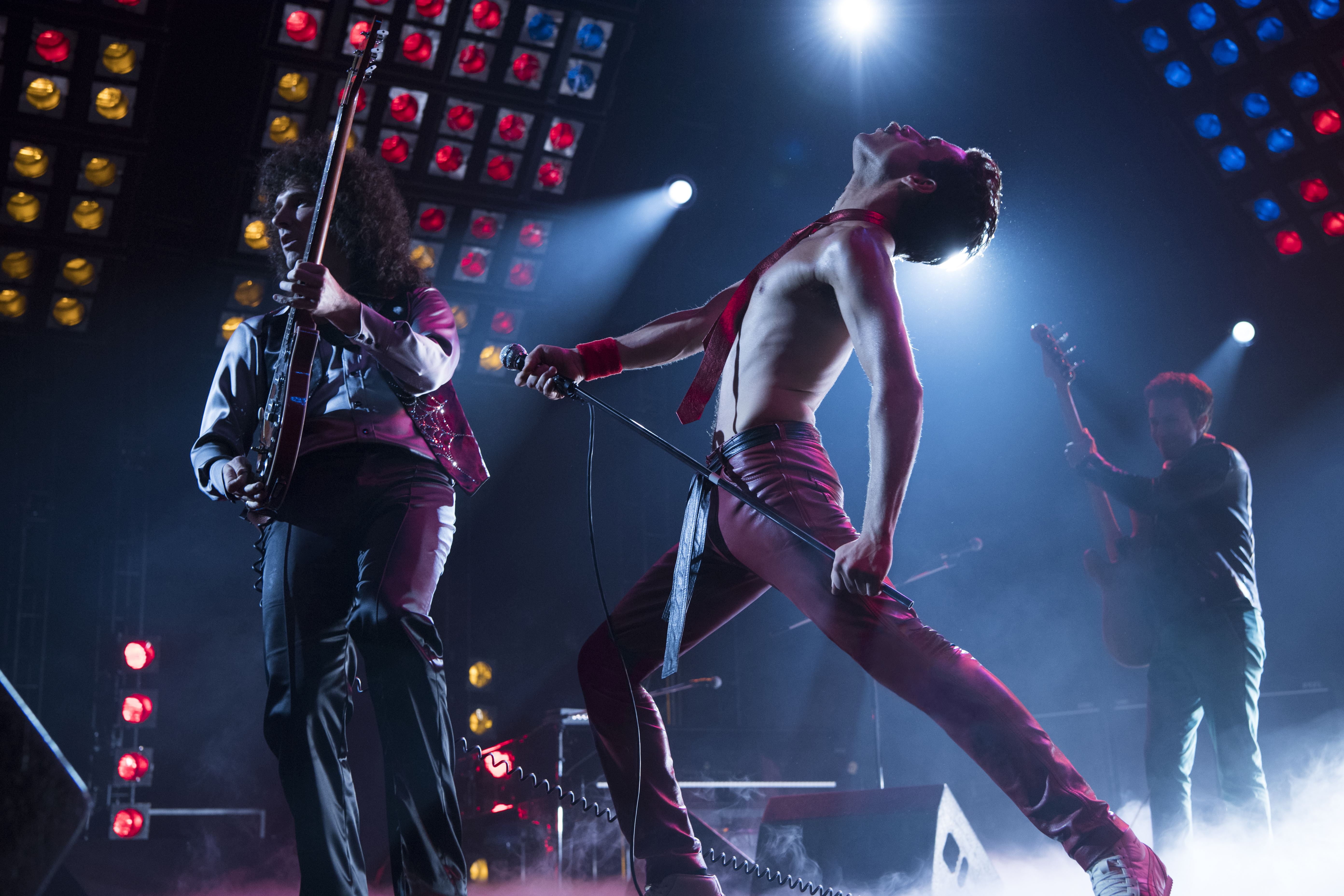 As we see the rise of their success as Queen and the progression of their music through the years, we also see the band develop both as individuals and a group. The change from the seventies to eighties sees an evolution in physical appearances of the band – such as the arrival of Mercury’s iconic moustache. Additionally, the change of social context and what was going on in the music world has an impact on the music they are making. We see the comical recording of the eclectic ‘Bohemian Rhapsody’ in the film, and the subsequent presentation of the track to their label where it is not exactly received well. The EMI record executive that they present the track to is adamant that the song is no good and is not single worthy, and as it turns out the joke is clearly on him. Playing the record exec is Mike Myers, which is a very clever casting decision seeing as Myers played the character of Wayne in ‘Wayne’s World’, which arguably shot the track to its height of success.

The film shines a light on the undeniably magnetic stage presence of Freddie Mercury and his high energy performances, while still delving into the lives and talents of band members Brian May, John Deacon, and Roger Taylor. May and Taylor served as creative consultants for the film, ensuring the audience knows that Queen was more than just its charismatic frontman. Brian May stands out during a band practice where he presents the simple step-step-clap rhythm for the fan favourite ‘We Will Rock You’. In a similar nature, bass player John Deacon steals the limelight when he presents the iconic riff for ‘Another One Bites the Dust’. The track was their response to the rise of disco in the 1970’s, which Mercury was especially was interested in pursuing, given his experimental and progressive vision for the band. These dramatised scenes give a new meaning to Queen’s most memorable tracks. Consequently, the audience can not help but be excited about Queen’s music – parallel to the excitement with which it was received at the time. 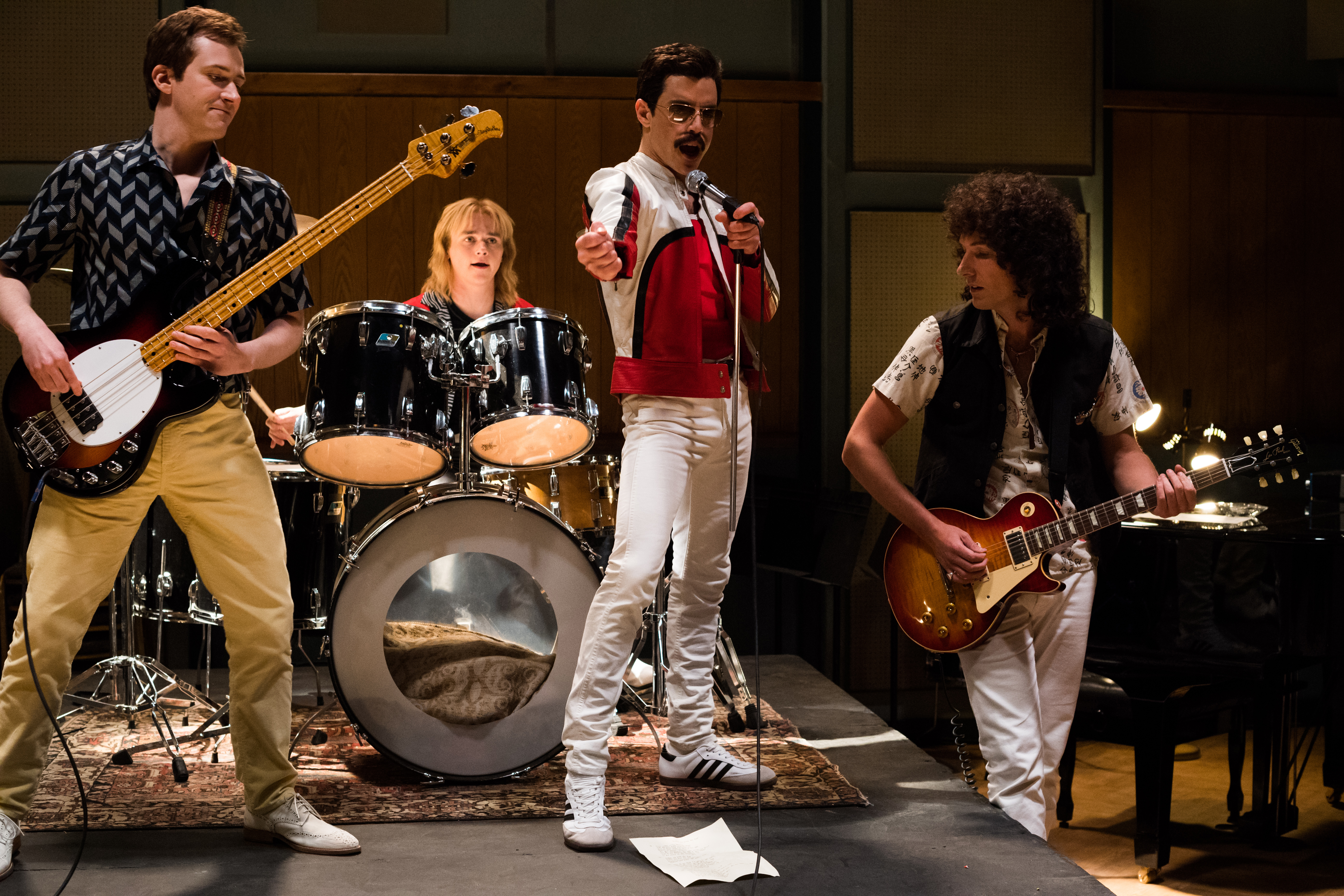 The soundtrack ties in seamlessly with the film, featuring a wide variety of tracks that successfully document the band’s journey. Starting from a re-recorded ‘Doing All Right’ with the original Smile line up (Queen before Freddie Mercury), to featuring some of their best-known tracks, and even featuring the previously unreleased live recordings of all of the tracks directly from Live Aid.

The film shows the highs and lows of the band, and more specifically for Freddie Mercury’s private life. As Queen grows more successful, the touring life has dire consequences for Mercury. As he is forced to come to terms with his fame and sexual identity, he starts living an increasingly decadent and wild lifestyle, causing tension within the band and conflict within himself. The group smooth things out just in time for the most important performance of their career – the now iconic 1985 Live Aid performance. In order to do it justice, the last segment of the film is a shot for shot rendition of the legendary performance that went down in rock history. It’s nearly impossible to walk away from the film without feeling the effects of a powerful combination of talent, charisma, music and unity.

Queen’s epic career and the intricacies of their personal lives and relationships cannot be fully covered in two hours, but Bohemian Rhapsody does a good job of showcasing their most pivotal moments. By relying on their music to communicate their ascension to fame, the biopic captures the essence of the band over the years of their career and brings a whole new life to the timeless tracks that rocked the world.