Drinking from a shoe… a bit of an odd concept. A bit of a gross and smelly concept, actually. But none the less, a very very important down under ritual that only Kiwi’s and Aussie’s will understand.
A right of passage.
A shoey.

Mostly seen at parties and festivals, the act of doing a shoey follows these very simple steps:

1. Take off one of your shoes

2. Pour your entire drink in the shoe

3. Drink the entire beverage out of your shoe

It’s also fairly common practice to do said shoey out of someone else’s shoe, and that’s exactly what Post Malone has done on a number of occasions.

Every time Post performs here in New Zealand, he really likes to fully submerge himself in the true down under culture. If you have a crowd of over 8,000 people chanting ‘SHOEY, SHOEY, SHOEY’ at you every night, you also don’t really have a choice.

To count down our top 10 Posty shoeys, we must start at the very beginning. The first shoey where it all began for Post Malone. 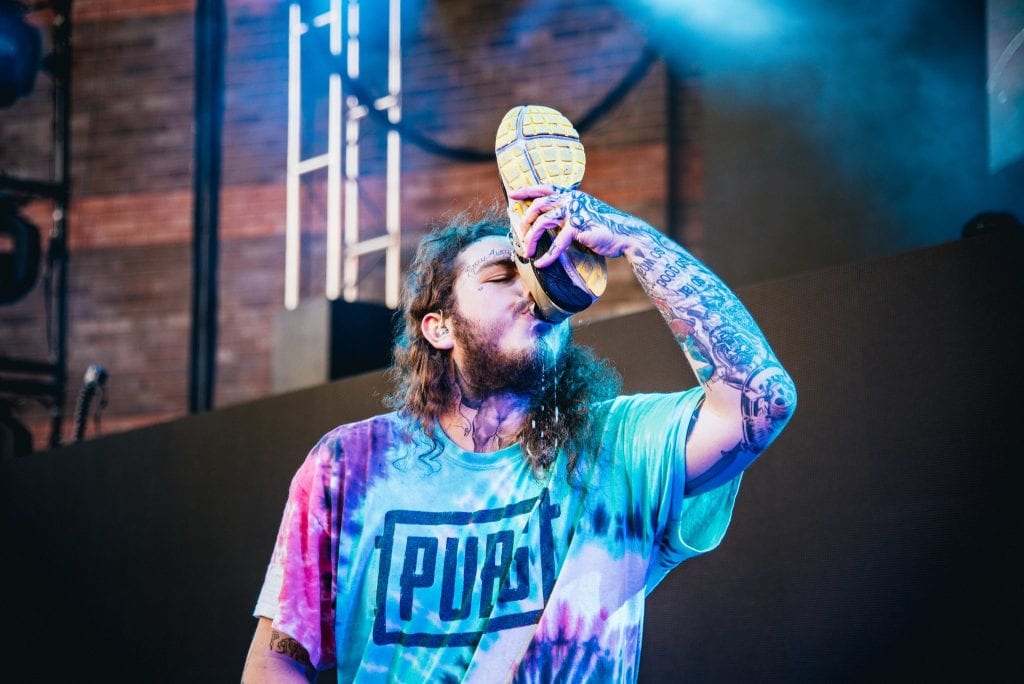 Little did he know that from this moment onwards, there would be no turning back. The rest of his trip down under was history.

First night of the 2019 Aus/NZ tour in Perth he introduced Tyla Yaweh to his first shoey. Straight out of the videographer Chris Villa’s New Balance’s which he had to throw out afterwards.

Still early days on tour, you can hear him scream after this Melbourne shoey, “Fuck yeah baby!”

Posty’s second night in Sydney, nothing could wipe off the pure excitement from his face. Absolutely loving the shoeys every night.

Night two on tour in Brisbane, he finally realises how gross this every night routine is starting to become. You can hear him say “You guys are f-ing sick man.”

@PostMalone‘s first shoey out of a Yeezy (📽 via @smitty) pic.twitter.com/u7wPLyU4GX

A very important night in Melbourne, Posty’s first ever shoey out of a Yeezy. A moment in shoey history that must be treasured.

The chant is a very important part of a shoey. Here in the Brisbane crowd they proved to him that they knew every word: “Here’s to Posty he’s true blue. He’s a piss pot through and through. He’s a bastard so they say, he didn’t go to heaven, but he went the other way he’s going down, down, down.”

Sydney Night 1 Shoey in Van’s (@Smitty being grossed out to his core) @PostMalone pic.twitter.com/4ZrhMVwSA1

Smitty, Post Malone’s DJ, commentating just how disgusting he truly thinks it is. I mean, he’s got a point.

One of the best shoeys to ever happen is back in 2018 at the Auckland show at Trusts Arena (we might be a little biased, though). Here you can see him shaking his head in disbelief knowing that he really has made this a forever tradition for himself. After his shoey you can hear him say, “My friend, you have some stinky ass feet brother.”

Saving the best for last. Posty’s shoey here in Auckland on May 11th 2019 is by far one of the best. During the last two nights of the Aus/NZ Tour he apologised for being super sick. We think it may have been due to the sweaty, warm and dirty shoeys he consumed for 12 nights straight.
However, nothing can stop him though!

When Post Malone makes his way back to New Zealand make sure you don’t let him leave without doing another shoey. It’s tradition!

Post Malone’s third album Hollywood’s Bleeding is only 4 days away from dropping, so… who else is going to celebrate with a shoey?

WATCH: Billie Eilish Returns For Her 5th Year of The Same Interview with Vanity Fair

The Discography of Snoop Dogg

Q&A: Holly Humberstone is Ready to Make Her Mark