Our Top Tracks by Rihanna

With Rihanna’s birthday fast approaching, let’s Dutty Wine through the years of her absolute best bangers (in our opinion). These are the tracks she should perform at her own birthday party because they are all so damn good! In no particular order, because we all know as part of her navy that we can’t rank the superstar, I present to you a few of our personal favourites.

1. Let’s start with Rihanna’s first debut single, released over a decade ago in 2005

The fresh-faced 16-year-old stormed the charts in 2005 with the Caribbean rhythm ‘Pon De Replay’. To be honest for quite some time we were unsure of what ‘Pon De Replay’ meant, but don’t worry we have you covered (drum roll please) it means ‘PLAY IT AGAIN’ and yes, we played it again, and again AND AGAIN and loved it!

2. A year later Rihanna delivered us a real heavy song that related back to a relationship she had when she was 14 years old

“Unfaithful” took every schoolgirl on an emotional rollercoaster when the song first debuted. Inspired by the rock band Evanescence, it was a completely different side to Rihanna’s work and what we were used to. The moody ballad was initially going to be titled “murderer” so we’re kinda glad that didn’t stick.

3. We were having “Wild Thoughts” when DJ Kaled sampled and dropped Santana’s 1999 sexy hit “Maria Maria”

Rhianna featured heavily on “Wild Thoughts” alongside Bryson Tiller. This track really made us want to sway our hips and do a Latino dance. It was performed at the Grammys in 2018 and Rihanna absolutely killed it.

This sexy track got to number one in the States and had everyone Dutty Wining in the clubs, the bars and on the beach! Our favourite lyric in the song has to be… “I’ma let you be a rider, giddy up, giddy up, giddy up babe” And they say romance is dead…

5. I’m ‘Four Five Seconds’ from wildin’ out about how much I love this collaboration with Paul McCartney and Kanye West

This unsuspecting team created a masterpiece with McMartney’s infectious guitar lick and Riri’s slay power. The track is definitely a Sunday song for after a heavy weekend (we’ve all been there, Riri). The track also helped the former Beatle star get his first top 5 hit in 31 years. Wow –  we weren’t even born then.

Three years ago, the pair team up for a booty popping reggae-pop tune. It even has two videos but one is definitely raunchier than the other – take a look you’ll see exactly what we mean! Often mistaken for a party song, this track by our beloved Carribean Princess is actually a break up tune. Let’s be real, most us had no idea what the majority of the lyrics were but we still went crazy for it anyway.

This soulful old school tune reminded us of a ‘shoo wop di wop’ kind of track that sounds like it belongs in a Bridget Jones movie. The song had over 408 MILLION plays on Spotify!

8. “Talk that talk” to me Riri, whats it like collaborating with Jay Z? Tell us all!

In 2011 Rihanna and Jay-Z hit the charts in over 15 different countries. ‘Talk that talk’ is also the name of Rihanna’s sixth studio album. The song samples The Notorious B.I.G.’s “I Got A Story To Tell” from the rapper’s 1997 final album, Life After Death.

In 2012, Riri teamed up with Mikky Ekko for an emotive ballad with a simple piano melody which melted our hearts. This perfect shower song left us all trying to hit those high notes. The video shows a vulnerable Rihanna curled up looking sad in the bathtub… something tells us she really does want him to stay?

10. “We found love” for Riri’s club-electro hit, as she teamed up with Calvin Harris

This track became the longest running number one single of 2011 and that could probably just be from us playing it on repeat every day. The video was shot in Ireland and co-stars the absolute British babe of a boxer Dudley O’Shaughnessy – it even won a Grammy and an MTV VMA!

11. Bitch Better Have My Money

Ah Rihanna, the badass we all know and love. The track was already a banger but then the video came out and we were hooked. When we grow up can we be as cool and as tough as Riri?? 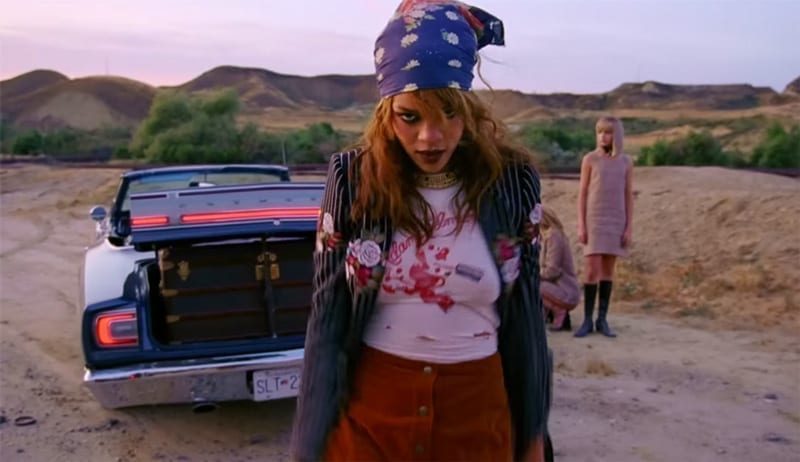