Behind The Interview: ZM’s Cam Mansel on Billie Eilish Complimenting His Teeth and His Embarrassing Halsey Encounter

For our new series, we chatted to ZM Chart’s host Cam Mansel about the time he interviewed a young Billie Eilish on her second visit to New Zealand back in 2018. Getting a behind-the-scenes insight as to what goes on in an interview, Cam details memorable experiences with select favourite stars, off-camera antics, and losing all chill when Shawn Mendes enters the studio.

I just wanna start with the idea of landing an interview and how the whole process gets done. I imagine it’s pretty exciting securing an interview with a star, but what’s the kind of legwork that goes into it?

Typically, when a record label thinks an artist is up and coming, they’ll come to me and be like “hey, we’ve got this new artist, we think they’re gonna be really great and they’re awesome talent in terms of interviews. Do you wanna have a chat?” And normally I’m super keen, because a big part of what I do on my show is playing up and coming talent before they get as big as we expect them to become. I had been listening to Billie Eilish a little bit before the interview request had come through and loved her music and just thought she was gonna be the next big thing anyway, so when the interview request came though I was like hell yeah, this is such an awesome opportunity. She was as amazing in the interview as I ever would’ve imagined her to be, so it was awesome.

Did you get any pre-interview jitters or nightmares of omg, what if it all goes wrong?

Not really. I think most artists are pretty chill in terms of technical situations and things like that. If on the day anything like that happens, you just kind of explain what’s happening and most of the time they’re okay with it. I think with Billie I was a little bit nervous just in the fact that … I don’t know, sometimes artists when they’re blowing up massively can sometimes get a bit of an ego. But it never really seemed like Billie had an ego. You’re always a little unsure on that front, but she was literally one of the nicest people I’ve ever met. It was just super chill. Her mum Maggie was with her and she was super nice as well.

Anything funny or unexpected happen behind the scenes?

When she first walked into the studio I was already sitting at the place where I control the desk, just getting stuff ready so we could just get straight into it, and when she walked into the room I was like “hey I’m Cam!” and she was like “OMG your teeth are amazing!” That’s literally the first thing she said to me, which no one saw, no one will ever know, but I still find it to this day one of the funniest moments ever. Like, when going into an interview, just the fact she liked my teeth.

I imagine it’s pretty bragworthy, the fact that Billie Eilish likes your teeth

Well I haven’t put it on my Tinder bio, but now that you mention it I probably should!

You did mention it briefly before, but did you know at the time that Billie was going to become such a huge star?

Yes and no. I think I knew she was always going to be massive, but I didn’t realise how massive she was gonna be. For example, when I interviewed her it was the time that she came and played at the Tuning Fork, which is the little venue just off to the side of Spark Arena, and she was playing to about 350 people. And literally the following year she came back and did a sold-out Spark Arena show. I think in terms of how quickly she blew up, I didn’t think it would happen so quickly or that she’d be as big as she became. I always knew that she would be huge but probably not quite to the extent that she was/is. And I think the thing that is most mesmerising about Billie is that, a lot of people say that they’re authentically and unapologetically themselves, but Billie is basically the essence of that word. She wants people to relate to the music and that’s the reason she does what she does. I just feel like she’s unapologetically herself 100% of the time.

Have you caught up with Billie since?

Yeah, I’ve interviewed her over the phone a few times since that initial one I did. It was crazy, I think it was around the time she announced Laneway; she had released an EP and I did an interview with her when she released it then I did another interview with her when the announcement of Laneway was lined up. And then something else happened where I did another interview, so it was like 1 month where I interviewed her 3 times. Which was kind of wild but really cool at the same time.

And was she still the same down-to-earth personality as the very first interview?

Yeah, she’s super down-to-earth, super chill. I feel like, have you seen the interview where she does the same questions and it’s like a year apart? I just think there’s so many hurdles and so many hoops that you have to jump through when you’re an artist of the calibre that Billie Eilish is at, and even just things that have happened in her personal life that she’s dealing with. I think in a short amount of time she’s had to deal with a lot so she’s still just as nice, just as humble, just as talented, but I do feel like her personality has changed. But maybe that’s just part of her growing up. Like I said, when I interviewed her, she was 17. And I feel like between the years where you’re 16 and 20 is when you do the most growth as a person, so if she was exactly the same it’d be kind of weird. And considering her situation, I think it’s all relevant as to what’s going on. But the thing that was really cool about her was whilst we were doing the interview and the cameras were on and everything, she was exactly the same person as when the cameras were off.

You’ve interviewed tons of other awesome artists; do you have any other funny or favourite stories that stand out?

Billie Eilish has always been a favourite so that’s been awesome. Hmm. Who else? Oh, Halsey! Am I joking? Halsey! Absolute queen. I love Halsey forever, she’s the best. Legitimately the best. Probably the most embarrassing thing that’s ever happened to me, I was on the red carpet at the EMAs for MTV and one of the girls who was working for MTV in England that I had met before on another trip was like “hey Cam, I know you’re a big fan of Halsey. I’ve got her coming down, do you wanna have a quick chat with her?” And I was like “YES 100% I wanna chat to Halsey.” So, I’m standing there, I see Halsey coming and I’m like omg here she comes. And I’m a big fan of Halsey. I’m always keeping up to date with what she’s doing on social media, when she’s got new albums coming out, everything like that, but in the heat of the moment and whatever the heck was going on, I just had a complete mind blank and couldn’t think of the name of any of her songs … it was the worst. And so, I’m standing in Bilbao, Spain in front of Halsey and all I could think to say was “so, what have you been up to?” And she was like “what do you mean? Like today or in life or in my career in general?” And I was just like “anything, just tell me about your life …” She’s like “well I’m gonna be performing the Victoria Secret Fashion Show soon …” and she just tells me all these things she’s up to. It was kind of embarrassing at the time, but now I look back on it and I’m like it’s actually just kind of funny. 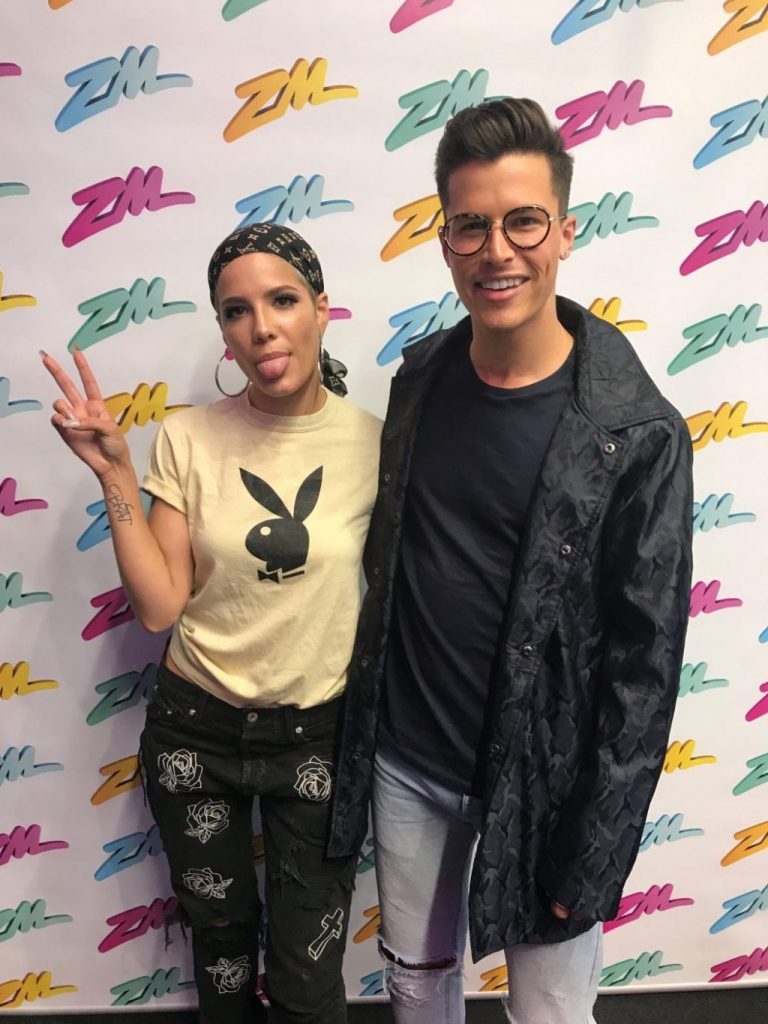 Do you still get starstruck by anyone?

It depends who it is and what level I relate to their music. I think I’ve gotten more chill about doing interviews, but when someone like Shawn Mendes comes into the studio, I lose all chill. It’s quite weird though because there’s been the odd occasion where everyone in the office will know how much of a fan of a particular artist I am, and they’ll know that on the inside I’m absolutely dying, but on the outside I’ve just got this chill wall up. I wanna say that I think I’m chill, but maybe I’m actually not!

Just to end things off, I’ve got a few quickfire Billie questions to throw your way. The first one, what’s your all-time favourite Billie song?

‘you should see me in a crown.’ I just love how sassy it is.

I’m gonna go with ‘When We All Fall Asleep, Where Do We Go’. That’s my fave.

And lastly, if you could say one thing to her now, what would it be?

Probably just, I hope you’re okay. You’ve already done so much in your career and you should be super proud of yourself. Thanks for always staying true to yourself, I think that’s super important.