Lorde’s Graced Our Inboxes With A New Email

Lorde has graced our inboxes once again, this time giving us an insight into her thoughts over the last few years, from way back before Solar Power had even been conceptualised.

For a glimpse into Lorde’s mind and her creative process, check out the email she sent out earlier today below! 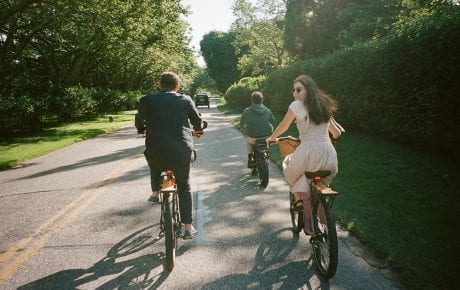 Been a cool strange couple weeks since we last spoke. I left New Zealand for the foreseeable future, mooched in LA for a bit, and then headed east. It’s always a pretty wild adjustment back into American life for me, particularly due to the zones I move in — I had true culture shock walking into my (very fancy) hotel room, and actually txted my manager in a panic, like is this too expensive? Are we sure this is ok? Another weird moment of culture shock onset shooting a thing (which I’ll maybe be able to share in next newsletter!) outdoors, everyone was sweating in jean shorts, looking like people, and I was wearing an archive Prada bolero top, hair and makeup pristine. I felt like a freak, you know? Like a fancy little goldfish in her own special bowl. I know you know this, but pop star world is ridiculous and extravagant and excessive and very looks-focused, and I’m reminded of the deep oddness when I’ve been away from it for a while.
Anyway. Been going on long walks around the city, which is at its most juicy and delicious and vibrant, going to the studio when I can, starting to talk to journalists and shoot stuff and generally start to become the physical embodiment of my work. Lots of the time, I feel like a brain in a jar, or like this drawing of Ralph Waldo Emerson’s called the transparent eyeball (which I highly recommend you Google, because it’s very much a Solar Power guiding light), but around this time, I’m reminded that I do in fact live in a body that people can see, and it helps communicate and symbolise the work I’ve made. So trying to walk a lot, look at people and things and generally (I hate this phrase every time anyone uses it and I’m inviting you to hate me now) ground myself, and each day that passes sees me become a little more in it, a little less shy about everything and a little more ready to invite you in. Really, I want you to have the whole album tomorrow. But we’ll get to all that. 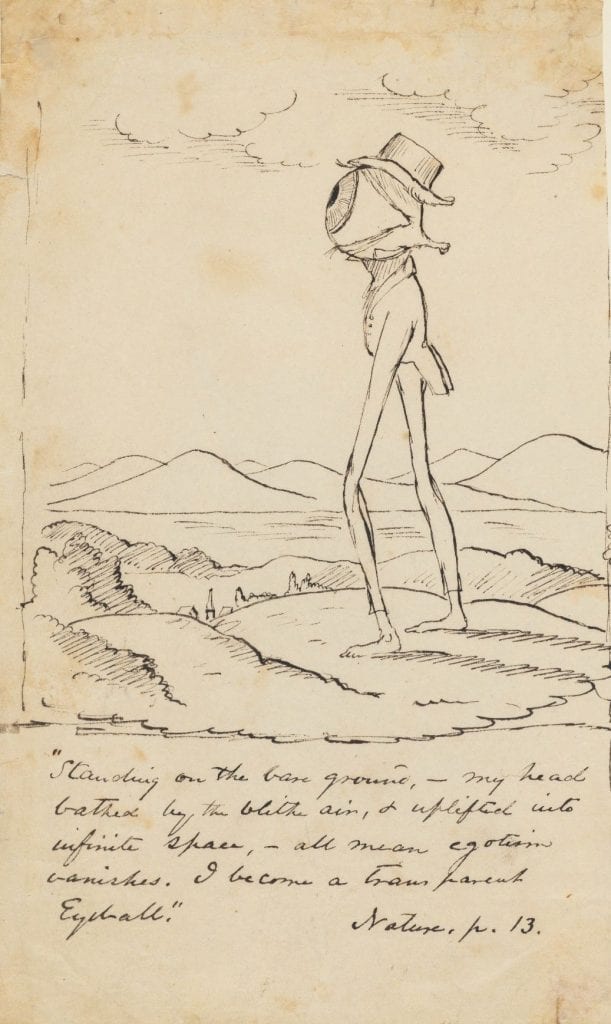 I was up late last night, scrolling through the Notes folder on my iPhone. Notes has become sort of this mythical zone for the modern songwriter, as with Voice Memos, and it’s true — we are all writing every fucking song using these two applications. When i think about any romantic notions I may have had as a kid of writing my songs elegantly in a notebook with pen, I laugh. The truth is, my written hand is really slow. Typing is the fastest I can get something out, and speed is key. But my Notes app also functions as a sort of interesting time capsule— I can see lists of groceries or Christmas gifts I needed to buy years ago alongside deep thoughts about where I’m at and what I’m making as they start to form. I took some screenshots last night, cause I thought it could be of vague interest to you.

Starting here, late 2018. Hadn’t started writing anything for this album, but having thoughts about it. And starting to hate being online. 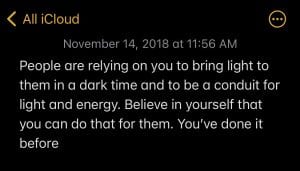 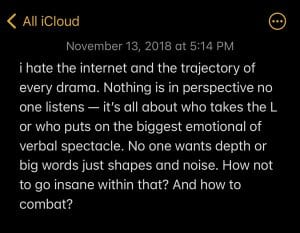 Thinking more about myself as a domestic person, a partner, a mother. 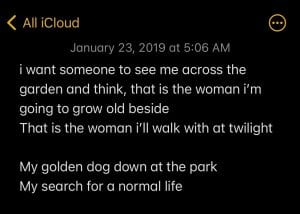 Driving back from Matapouri and going through one of those full roaring tunnels of cicada sound, it striking a deep chord.

Starting to conceptualise — again, this is before any music has really been written… Maybe I had one song. Check out the March 7th note that’s basically the Solar Power video… before we’d written it. 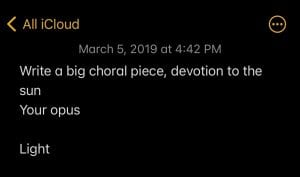 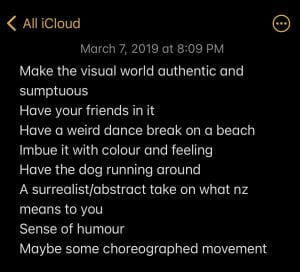 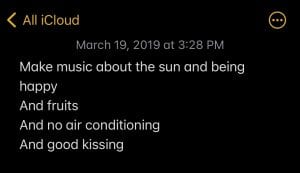 Believe this more deeply than ever!

And to finish, a weirdly prescient note, a year before this was all anyone talked about: 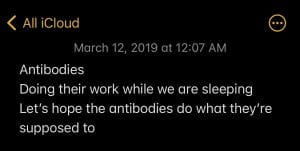 Hope you’re good, and doing some fun summertime shit if you can. Oh, I forgot to say, I was here for 4th of July, my first ever. We rode around Amagansett on bikes at dusk, parked up at the beach and stood on the sand for a few minutes. I had eaten a gummy. The light was gold and misted. Wealthy people were sunning themselves. It was distinctly surreal and beautiful, with something simmering underneath — America. 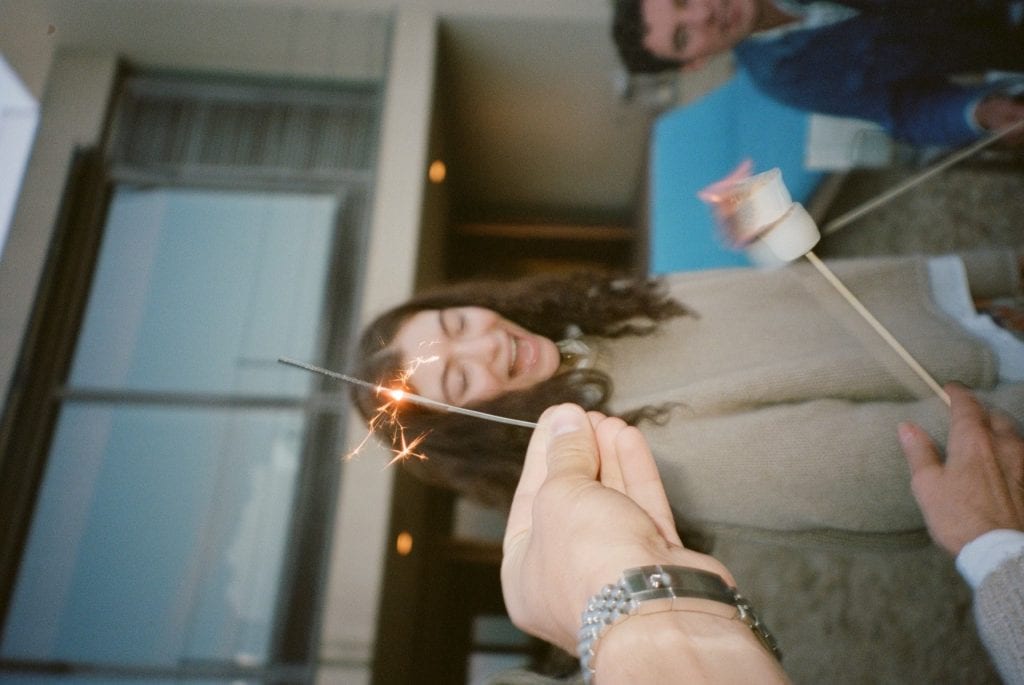